Tropic of Coldness “Deriva” is now available in store in digital format and cd.

After the successful experience of “Maps of reason” published in 2019, the Brussels-based duo Tropic of Coldness is back on Krysalisound with their eight record “Deriva”.

“Deriva” fits as the soundtrack of docking on a safe harbour after being exposed to the currents of irrationality and emotional restlessness.

This record is released exactly 10 years after Tropic of Coldness’ debut in spring 2012 and leverages on the experiences made during this long journey. It finds its ground on the strive to constantly enrich and expand the duo’s inspirational interactivity.

Tropic of Coldness is above all an alchemy resulting from the friendship and constant dialogue between David Gutman and Giovanni La Placa, being the logbook of their conversations and reflections about society transformations and dynamics

Friday 27th November, at 9 p.m. the ambient / electroacoustic duo Tropic of Coldness will perform from their studio in Brussels for a new KSND Live Première. Don’t miss it!

“Tropic of Coldness” is a duo formed by David and Giovanni, in Brussels, Belgium, during the autumn of 2011. David is a guitarist, synth and sample player, already active on the Brussels scene with his electro / experimental project “Drawing Virtual Gardens”. Giovanni plays guitar, voice and samples for the North-East Italian band “Fuji Apple Worship”, involved in a melting pot of drones, field recordings and minimal sound sculptures. Since its beginning in November 2011, Tropic of Coldness focused on drones / ambient / electroacoustics originated from improvised session, with layers of processed guitars and synths, surrounded and filtrated by field recordings in a sort of acoustic archaeology. The sound research permeates every single note and the harmonic pattern is oriented towards both instrumental and compositional exploration, in a combination of ambient and electronic elements. Tropic of Coldness have performed live in Brussels, London, Paris, Berlin, Vienna as well as touring in other cities of Belgium, the Netherlands and Germany and their recordings have been issued by respected labels like Organic Industries, Shimmering Moods and Glacial Movements. 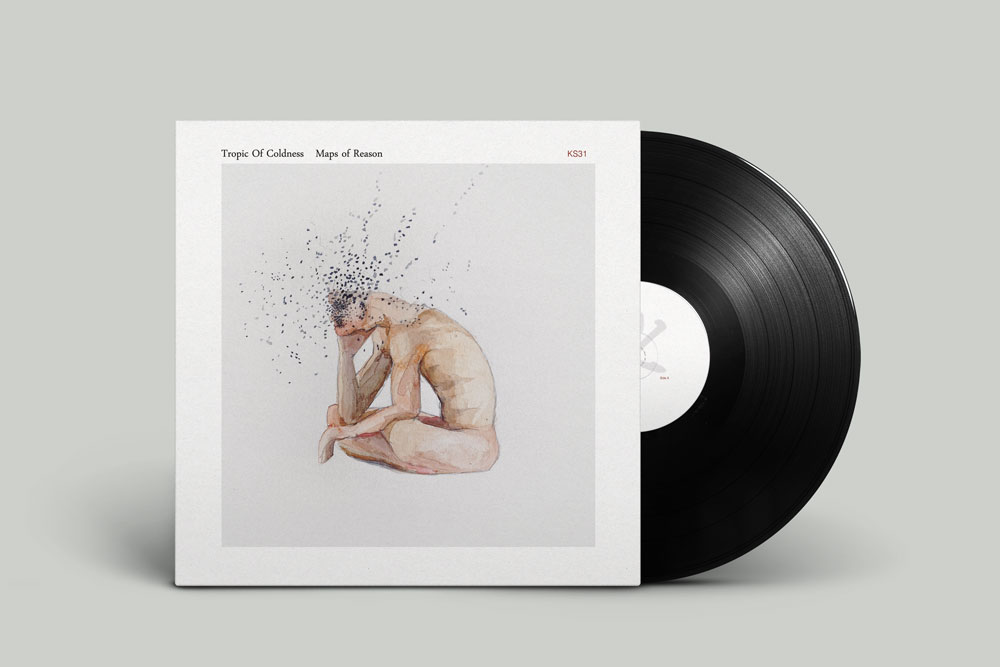 via — music won’t save you

Most Ambient of the present minute is precluded on one map of reason that relates to the ontology of the self. What does that mean Age, demographic, production time, together time, creation processes, and infinite gestures from a finite Drone void, in other words – a “map of reason”. But that’s just one map of reason, and a complex map. How do we make the map further simplified? The answer would seem to lie in the relationship each individual has with the specific music, the map in question, to use appropriate metaphor. This is what Tropic Of Coldness invite us to do here.

First of all, the vinyl artwork is sublime; a sort of intersexual build of male / ectomorph female vulnerability sitting in an upright, almost foetal pose. This calls to mind the labyrinths of the mind ToC are so good at swimming through with their hazy Robin Guthrie-esque guitars and swathes of delays and feedback trails. And that would seem their own ontology, a “reason for a map”, if you will. I am not inclined to read what their idea of a map here is about; I would rather the music dictate to me a perception, because music foretells so much more than words ever can. That said, there is a backstory behind this record, like most records. And at any extent, it sounds incredibly well produced. Just take “The Beauty And The Meaning”, track one, an achingly beautiful navel-gaze into an ever-circling storm in a tea cup.

Meanwhile, “Maps Of Reason” further in (but only track two) is a return to the form “Demography Of Data” left us with as a whole LP. Navel gazing is at once centred as it is permeate; looking around while listening to sounds similar to this creates a huge, mundane anti-nausea. The mundanity of it is to compliment it in my case – my meaning of mundane is “functional, precise” and not the other way round. Not boring. Not half-finished. This stuff is brilliantly formed and well-edited, like a densely packed novel that could do with some fleshing out to embrace the moments – and the navel gazing – as deeply as the navel will allow.

Talking a titter, when one (an Ambient producer, or whatnot) goes beyond the functional, music becomes artsy, opaque and like it is intended to needing adjustment to, to be naturally awkward. The “Art/alternative” style sections in record stores, however appreciated they are, are the opposite of what I look for in records, and the opposite of what ToC offer. ToC offer great music – just like on “The Loss Of Empathy”. And they do not need any labels to say “screw you mainstream, like me or lump me”.

It’s never been about that for mature musicians. Of course, when you’re a teen, just starting out, it’s the kind of thing you do, you have a chip on your shoulder, and a frown as big as a boulder. Ambient for me never needed to do that – if you want to frown, go to noise parties or Skrillex brostep nights. Tropic Of Coldness, like Rameses III before them, do not like to play for too long in one go. It could actually be wagered it’s because music like this is so affecting, at times sad, but in true meaning deep and not weird at all, just deep. It’s perfect music for a lazy evening bath.

Closing piece “Diving For Pearls” to me understates the real meaning behind this album, the entirety is a large pearl of wisdom, never caught inside the clam, left to roll out on the ocean floor and find new hydrated horizons eventually, washed up on a shore. But far from being musically washed up, this is essentially the breakthrough record for Tropic Of Coldness, and they could not have chosen a better label to release this on than KrysaliSound. It’s the sound of it, just the sound of it. The music, the label, is the map, the reason. When you have true reason to do anything, that’s when you feel like you’ve achieved something.